Reconciliation and an inclusive pathway to citizenship! An explainer and opportunity to take action.

An inclusive pathway to citizenship for the 11 million undocumented people in the U.S. is urgent! Now is our chance to help make that happen.

Congress continues to move forward towards budget reconciliation, which can begin to tackle many pressing and long-standing problems with a progressive agenda. This agenda must include progress towards overhauling our immigration system. Through budget reconciliation we can bring immediate relief from deportation and work permits for the undocumented – basic conditions for the safety and survival of immigrant workers and families.

We must continue to make our voices heard on this and other critical immigration issues that continue to make headlines every day. Many of our members and supporters have already taken action on our petitions and letters to Biden and Congress. Thank you! We now invite you to take action and join this petition to President Biden, VP Harris, and Senate leadership to immediately: 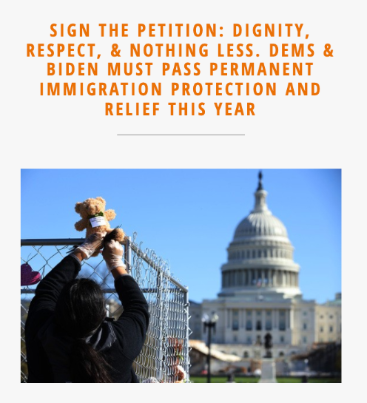 We cannot let down our guard on immigrant rights. While President Biden had started out strong with bold statements on immigration and the issuance of Executive Orders rolling back some of the most extreme Trump-era policies, we have seen numerous setbacks to progress. Some of the orders have been thwarted by partisan-leaning courts, including his attempts to reinstate DACA and end Migrant Protection Protocols. This administration can and must continue to fight and appeal these judicial setbacks.

However, many of Biden’s actions on immigration, unfortunately, have been deeply concerning and we are experiencing the erosion of the “hopefulness” that had come with his election promises. Most recently, we have been appalled by the reprehensible governmental response and treatment of Haitian migrants at the US-Mexico border in Texas, and that has included mass deportations and expulsions.

Biden has doubled down on the Title 42 public health code used to “close the border”, despite a court order for its rescission. This rationale has been debunked by Dr. Anthony Fauci, and the public resignation of Harold Koh, a senior State Department advisor, who wrote a seething 6-page letter calling Title 42 “illegal,” “inhumane’ and ‘not worthy of this Administration that I so strongly support.’

Clearly, Biden has not yet taken the bold approach to immigration that he promised on the campaign trail.

We must have inclusive, durable reforms to bring relief to all 11 million undocumented, many of whom are essential workers who continue to care for and feed the nation, and whose communities rallied for Biden to get elected. National polls are consistently finding that 70% of the country supports a pathway to citizenship for undocumented immigrants.

The public wants it, we want it, immigrant communities need these reforms. And the Democrats have it in their power to do it!

You can still weigh in!

We are accepting signatures through Oct. 22, after which the petition will be delivered.